My 2019 reading list was filled with exciting, insightful and thought-provoking books; all of which sparked a new idea, provoked emotion and rendered clarity to my blurry thoughts. This list is far from exhaustive, but it captures diverse genres that caught my attention and made a good impression.

Headscarves and Hymens, Why the Middle East Needs a Sexual Revolution by Mona Eltahawy

I remember reading this book on a train ride home and as I flipped through the pages, drops of tears escaped from my eyes. I was enraged, shocked, inspired and enraged again.

In Headscarves and Hymens, Eltahawy brings to light anecdotes of abuse, atrocities and injustice taking place in the Middle East and North Africa. It is a must-read for anyone who wants to understand the power imbalances in the Middle East and the deep consequences it has had on the lives and autonomy of women. It also serves as a voice for the millions of women who have been silenced in the most conservative parts of the world and an audacious call to action for gender equality. 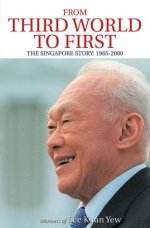 A detailed story of how a small island in Southeast Asia became an economic powerhouse, straight from the horse’s mouth.

Singapore is often cited as an economic success story and the late Lee Kuan Yew was the man responsible for its remarkable transformation. This book is an intricate look at his life as Prime Minister and the decisions he made to bring Singapore to the point where it is now (one of the richest countries in the world). It’s a long read, but each page is packed with deep insights and wisdom. I would recommend this to world leaders scrambling to get a sense of what good governance entails and how to achieve it.

Ngozi Okonjo- Iweala is one of the few economists I look up to. Her numerous achievements in Nigeria and beyond embody excellence. So, every time she writes, I read.

This bold take on corruption in Nigeria by the Former Minister of Finance is a compelling read. Okonjo- Iweala vividly takes us through the trials and tribulations she faced when working for the Nigerian government; including the heartfelt story of the kidnapping of her 83-year-old mother in an attempt to get her to resign from her position as Finance Minister. “Telling my story is risky, but not telling it is also dangerous”, she says. It is an inspiring read for anyone who wants to understand the deep-rooted nature of corruption in Nigeria and Africa as a whole; with valuable lessons on how to navigate the messy web of corruption, politics and everything in between.

The Future of Capitalism: Facing the New Anxieties by Paul Collier

The very first book I read about poverty was Paul Collier’s Bottom Billion. It was instrumental in helping me understand the different dimensions of poverty and how it affects the lives of those at the bottom. “The Future of Capitalism” is much different, as it does not focus on poverty or conflict which is arguably Collier’s niche. Instead, he rigorously explores the failures of capitalism as an economic system.

In the first chapter titled “New Anxieties”, he identifies issues that are instigating discord in society and changing the face of politics; using Brexit and the rise of Donald Trump as examples. He concludes the book with solutions to “Break the Extremes”. Collier does a thorough job in illustrating the deficiencies of capitalism and how it can be remodelled to mend the social, economic and political divides evident in modern societies today.

The Future of Capitalism: Facing the New Anxieties, is a thought-provoking book that talks about an important issue that we should all be concerned about.

Africa; Why Economists Get It Wrong by Morten Jerven

“Does Africa have some inherent character flaw that keeps it backward and incapable of development?”

This was the question posed by The Economist in 2000. Yet, 11 years after, the narrative shifted to “Africa rising” and “The Hopeful Continent”. What changed?

This book explores how the conversations on the growth and development of sub-Saharan Africa in the postcolonial era have been greatly misunderstood.

Using historical and economic evidence, Jerven argues that the theories and conventional wisdom about African development are greatly flawed and could negatively impact development policies. He challenges the pessimistic view of Africa as a hopeless continent that has not been growing. In this regard, he dissects the popular book “Bottom Billion” by Paul Collier and labels the bestseller as misleading, because African economies were actually growing during that period. According to Jerven, our knowledge about the continent is limited and incomplete due to Poor Numbers which inevitably creates a bias in how economists perceive the conditions of poor people living in poor economies.

“If we encounter a man of rare intellect, we should ask him what books he reads.”  Ralph Waldo Emerson

I am always looking for a good book, so if you have any recommendations for 2020 please feel free to drop me an email or comment below!

Thank you for reading & have a wonderful year ahead

International Day for Mine Awareness and Assistance in Mine Action

International Day of Sport for Development and Peace

International Day of Reflection on the Genocide in Rwanda

World Day for Safety and Health at Work