When I think of malaria, the first thing that comes to mind is “weakness”. Unfortunately, it has a comparable effect on economic growth. It is somehow incomprehensible and mind-boggling that such a deadly parasitic disease is transmitted through the mere bite of something as irrelevant as the bite of a female Anopheles mosquito.

Disease and poor health signify a huge burden to affected individuals. Although it is difficult to quantify, the welfare losses to the individual are highly significant. This problem is exaggerated in developing regions where there is a limited provision of healthcare, infrastructure and social security.

Malaria is preventable and treatable, yet nearly half of the world’s population remains at risk. According to the World Health Organization (WHO), In 2016, there were an estimated 216 million cases of malaria in 91 countries (an increase of about 5 million over 2015). Likewise, Malaria deaths reached 445, 000 in 2016. Africa accounts for  90% of malaria cases and 91% of malaria deaths. Malaria has been identified as the main cause of death of children under the age of 5 in sub-Saharan Africa. It kills a child every 60 seconds and poses a deadly threat to pregnant women.

Malaria is highly predominant in Africa for the reasons listed below:

In other parts of the world, malaria is a less prominent cause of death but can cause substantial disease and incapacitation, particularly in rural areas of some countries in South Asia and South America. 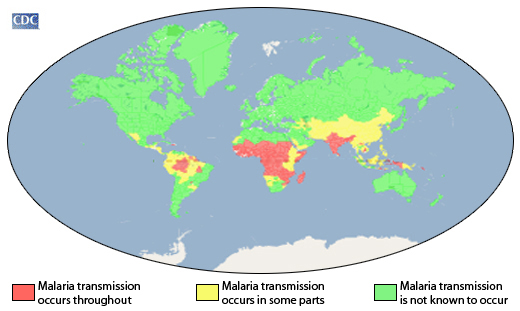 What is the Economic Impact of Malaria?

Malaria imposes significant costs for both affected individuals and the economy as a whole. It costs Africa an estimated $12 billion annually. This figure captures the cost of health care, days lost in education and employment, the decline in productivity, lowered trade and foreign direct investment and tourism. While acknowledging the various channels through which malaria can dampen growth and productivity, the focal point of this post will be on its impact on the labour market and education.

Malaria impacts the gross domestic product (GDP) of some African countries by  an estimated 5–6%.

Malaria inevitably affects both the volume and the productivity of inputs.  Directly, malaria debilitates a significant part of the labour force, and this is reflected in poor economic performance. Several studies have indicated that depending on the severity, malaria typically leads to a loss of four or more working days, accompanied by additional days with lowered work capacity. Individuals who are healthy can be more productive and contribute meaningfully to the labour market, leading to an increase in human capital which is imperative for economic growth and national development. The economic impact of malaria goes beyond the direct influence on labour productivity. A high malaria burden has the tendency to increase labour turnover. This is due to an increment in hiring and training costs and reduced profitability for businesses.

Early life health conditions and education predetermine an individual’s economic capability during the course of their life. As stated earlier, malaria mortality and morbidity rates remain significant in many countries in Africa. Children that go to school are exposed to a high malaria environment and are more susceptible to getting infected. Malaria infections often lead to school absenteeism. Across a population, this entails higher dropout rates, higher failure rates, and poorer achievement. I came across a moving story written by the brilliant Chimamanda Ngozi Adichie and I think it perfectly expresses the impact of malaria on education. This is the reality of so many children in Africa today. A disease that excludes people from society and impedes their ability to attain their full potential.

“Each time I had malaria, I didn’t go to school. Once, in Class 2, at the age of 13, I had a very bad case of malaria that made me miss a whole week of school. My friends came to visit bearing cards, as though on pilgrimage, and when I finally went back to school, I felt left out, bereft, because so much had passed me by. It was during that week that quadratic equations were covered in mathematics class. I missed it all. And I have, since then, never been able to make sense of quadratic equations. So perhaps the only good thing I can say for malaria is that I can’t be held responsible for my poor grasp of mathematics. It’s all malaria’s fault”

To conclude, tackling malaria requires significant resources, yet malaria itself hinders economic development, leading to a vicious cycle. Fighting malaria is not sufficient to completely eradicate poverty and foster growth in affected regions. Nevertheless, there is substantial evidence that suggests that the successful implementation of malaria eradication programs can have a positive impact on labour productivity, education and the macroeconomy. Individuals who are healthier can participate fully in productive activities and acquire the relevant knowledge and skills (via education) that would be useful in their life cycle.  Understanding the enormity of malaria on the economy as well as its channel of operation, will place malaria in its suitable economic context and improve the strategies put forward by governments to combat the disease.

Today is World Malaria Day. Regardless of the significant progress made by many affected countries, there is still so much work to be done. Where malaria thrives, society suffers.

3 thoughts on “The Economic Impact of Malaria”